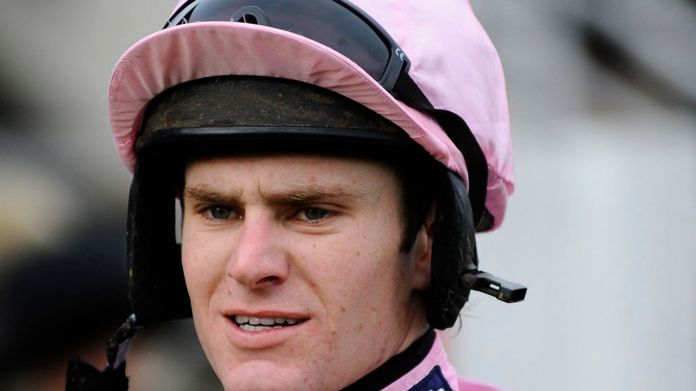 Nick Scholfield is hoping he may yet be able to return in time for the busy Christmas schedule after breaking his leg in a freak incident at Fontwell.The multiple Grade One-winning jockey suffered the injury on Friday when he was cannoned into by a loose horse as he crossed the finishing line in fourth on Shintori in the Star Sports Owner’s Club £20K Guarantee Handicap Chase.- Advertisement – He was due to ride Champagne Court in the feature Badger Beers Silver Trophy Handicap Chase at Wincanton on Saturday – but will be out of action for several weeks at least.“I’ve fractured my tibia,” said Scholfield.“I hope I can get back as quickly as possible – if I could do it in six weeks, that would be what I’m hoping.”- Advertisement – Go Steady had unseated his jockey Bridget Andrews at the third-last, but then ran loose before careering into Scholfield.He admits his frustration at the injury, just as the new National Hunt season begins to step up a gear, but acknowledges many others are encountering far more trying times during the ongoing coronavirus pandemic.“In these times, this is not so bad,” he added.- Advertisement – “It was unusual circumstances – something you don’t expect – so it’s frustrating from that aspect.“I’d crossed the line and finished the race on Shintori.“I was just pulling up, and a horse that had fallen was galloping (loose) and it has just ‘T-boned’ my horse, and my leg was stuck in the middle, and it caused me to fall off.” – Advertisement –